This is a story about the contribution that my now 89-year-old mother made during World War II and as a German Red Cross nurse employed by the German army.

This is a story about the contribution that my now 89-year-old mother made during World War II and as a German Red Cross nurse employed by the German army.

As a German-American myself, I am proud that also Germany’s World War II forces had heroes. My mother was one of these heroes. This is her article that appeared first in “Wuerzburger Erleben” and eTurboNews German edition a year ago.

It has now been a year, and this week, media in Germany started re-publishing this article. It resulted in hundreds of letters from readers with roots to Germany. Some living in far away places on our globe. It shows once more that there are no winners and losers in a way, and heroes on both side of the fence.

Würzburg is a city in the region of Franconia, Northern Bavaria, Germany. It is located on the Main River. It is the home of the Residence Palace – the “Castle above all Castles.” The Residence Palace is one of Europe’s most renowned baroque castles, and it is registered as a UNESCO World Cultural Heritage site.

For many American and German tourists, it is simply a beautiful city to visit. For my mother, this city has a great deal of meaning and history.

The Frankonian city of Würzburg was one of the German towns bombed in the last weeks of the Second World War. The most serious attack occurred on the evening of March 16, 1945 when British Royal Air Force bombers killed approximately 5000 civilians and almost completely destroyed the historic old town.

The decision to bomb the town was made by RAF Command in High Wycombe, west of London due to favorable weather conditions predicted for the sixteenth of March, 1945.

Because of a message from the command centre of the Franconian command in Limburg an der Lahn, the full alarm was given to the Würzburg population at 21:07.

The bombing proceeded in three waves from 21:25 to 21:42. First the roofs and windows of the old town were destroyed with 256 heavy bombs and aerial mines (396 tons).

This prepared the way for 300,000 incendiary bombs (582 tons). Within a very short time isolated pockets of fire emerged, and this developed into a single area-wide firestorm with temperatures from 1500-2000°C.

The population had only minimal warning, and fortified bunkers were seldom available. To avoid being caught in the fire-storm or suffocating, many people ran for their lives and tried to reach the banks of the Main river or the edge of town. The fire department was faced with a hopeless battle and tried to contain it with water lanes (Wassergasse). 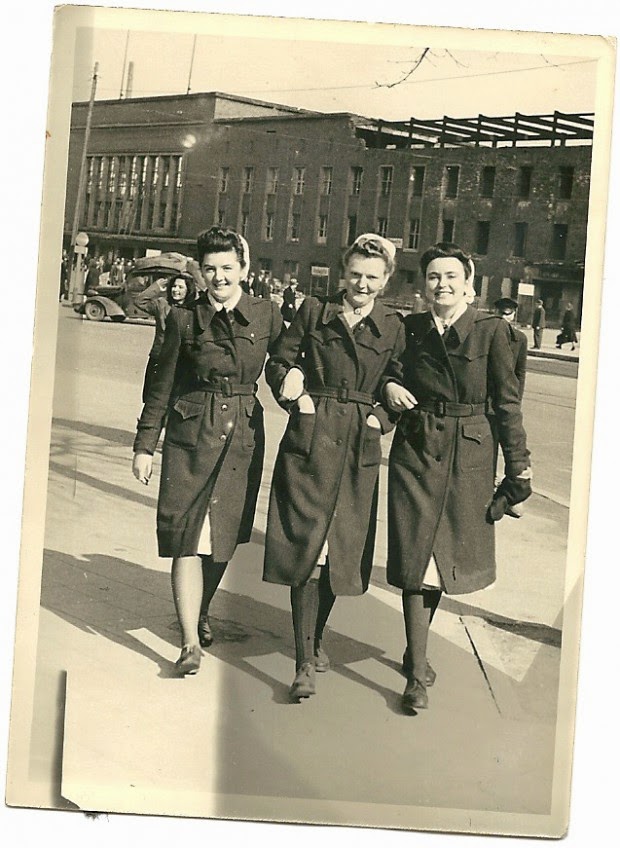 “During World War II, I was a nurse working for the German Red Cross and the German army. In 1944, I served in the Southern German city of Wuerzburtg in a recovery school for blind soldiers. This school was located in a monastery confiscated by the army. I was 18 years old at that time.

Every nurse cared for four blind soldiers. All the soldiers had already recovered from a stay in the hospital and most were now physically fit. All of them, of course, were in a very depressive state of mind. The youngest one was 21 years old and had lost both eyes in a parachute mission. His wife put her engagement ring on his bed and left.

Similar issues could be experienced on a daily basis. Two of the soldiers under my care had this same sort of thing happen to them. Of course, my soldiers were unable to read their mail, and one my task was to read their mail for them. It was also my task to respond to letters addressed to my soldiers.

The German army did a lot to cheer up the wounded and blind. Officers that were teachers in real life tried to educate soldiers. Soldiers were invited to concerts, and fun events like wine tastings were frequently organized.

During the winter, soldiers were invited to travel by horse carriage to an estate in the forest to enjoy a gourmet dinner. I played the accordion, and the soldiers had a great time. They requested songs, and I played popular songs from that time. I was very happy to see some smiles on the faces of my soldiers. We felt quiet safe in Wuerzburg.

At home in Duesseldorf, my parents and brothers lived in the basement, because nothing was left from their house after frequent bomb attacks. I was always worried about them.

The bomb attack on our Red Cross city Wuerzburg happened on March 16, 1945. The warning sirens sounded, and I was ordered not to take my soldiers into the bunker basement, but to a cave not far from the monastery.

It was a cave established in the 16th century by forced labor. There was an escape path. The path was very narrow and humid. Seconds after my group of soldiers were leaning inside the cave, the inferno started and took its course. All of us were very scared. When the bombing stopped, I peaked outside and what I saw was horrible and haunted me for decades to come. The sky was burning, and silver-looking objects rained down from the sky, setting everything on fire that had not yet been destroyed.

The first bombs dropped at 21:25, with an attack hour over Würzberg set for 21:35. The formation passed over the entire city with the 627th squadron of Mosquito twin-engined bombers marked with green flares. These illuminated the target area, marking them out by flares on Green parachutes, which the German population called “Christmas Trees.”

I put all my fears aside and rushed back to save some items from the library for the blind, but the flames were close on my heels, catching up with me. I was able to escape the flames and hours later returned to the cave to rescue my completely disturbed and scared blind solders. I had no idea where I should take them.

I was able to locate an almost destroyed barn in a meadow that gave us some shelter for the night. When daylight came, I saw completely burned dead bodies everywhere. For the rest of my life, I will never forget this scene and the smell. Ironically, the horror of the dead bodies were surrounded by beautiful spring flowers.

In order to get water, we had to go to the “Main” River while trying to stay away from low-flying air attacks by the British Royal Air Force. Somehow we got used to this danger and behaved like it was an ordinary day. All the while we could hear the gun registers, sounding in the distance much like the innocent tapping feet of dancing marionettes.

As we walked, we decided to stay close to the remaining railroad tracks hoping to find some fellow soldiers. I saw open wagons and tanks, demolished by gunfire. Every time we heard low-flying enemy attacks, we would hide in the ditch next to the railroads, terrified and scared to death. It must have been even worse for the blind soldiers that I had to lead, not being able to see.

There is so much more I could talk about from life during that time, like the soldiers that burned in their beds, and the dead bodies that were piled up in the churches, like babies taken away from their terrified mothers and slammed against the concrete until dead.

But since then, once the war was over, I traveled the world. Each new place was a new adventure that created wonderful, new, and happy memories for me. And yet, Wuerzburg, for all its sad memories, will forever remain a special place for me.

My call is for young and old to travel, meet people, enjoy the beauty of our common world. Wuerzburg is a beautiful example of a vibrant city to visit with a lot of history.

A war does not have winners or losers. I am worried about today’s situation. The Ukraine, Islamic State, right and left wing fanatics. Isn’t our young generation learning from what happened?

Keep traveling, learn from history – after all it’s still a wonderful world.

Germany.travel says about Wuerzburg:
Würzburg is a pleasing harmony of history, culture and wine. This university town and former royal seat is idyllically situated on either side of the Main river and offers a vibrant atmosphere and an endearing charm. It has gained a name as the centre of the Franconian winegrowing region and, not least, as a city with exceptional places of interest.

Würzburg is full of contrasts: a former episcopal seat and a young university town, baroque architecture and a distinctly mediterranean feel combined with Franconian hospitality.

The architectural splendours that define the city reflect a range of periods. Art, culture and Franconian wine are essential parts of Würzburg life and create a feast for all the senses. Visitors will find themselves on a captivating and exhilarating tour of discovery through different eras and styles.

Even from afar, the two imposing towers of St. Kilian’s Cathedral point the way to the city. Built by Bishop Bruno in 1040, it is the fourth largest Romanesque church in Germany at a total length of 105 metres. Würzburg’s famous landmarks are the UNESCO World Heritage Residenz Palace, with its palace gardens and square, the Marienberg Citadel and the 180-metre-long Old Main Bridge, which is lined with impressive statues of saints.

Straddling the banks of the Main river amid idyllic vineyards, the location alone is reason enough to visit Würzburg. Another reason is the local wine served in Bocksbeutel bottles, whose characteristic flattened round shape has become a trademark for the entire region.

It is not known for sure whether the shape is derived from the traditional water bottles once used in the fields, but it does have a significant advantage: it prevents the bottles from rolling away. Quaint pubs and traditional wine taverns offering local Franconian cuisine as well as top-class international restaurants can be found throughout the city. And, because this is Würzburg, it’s only right to order a Bocksbeutel of wine along with your meal.

The centrally located Bürgerspital was established as a charitable institution for people in need of care in the 14th century but also upholds another fine tradition: wine growing.

Regarded as the birthplace of the Bocksbeutel, the winery is certainly worth a visit. Also in the city centre is the Bürgerspital restaurant and wine tavern, regarded as the world’s centre for Bocksbeutel culture. But culture is also on offer elsewhere, for example in the fascinating museums. One of these, at the Marienberg Citadel, houses the largest collection of works by the famous woodcarver and sculptor Tilman Riemenschneider. You will encounter this great artist again in the Cathedral Museum, which features around 300 pictures and sculptures from the last millennium. 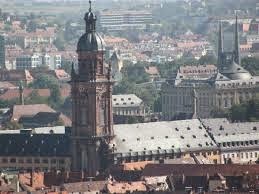 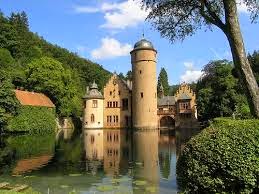 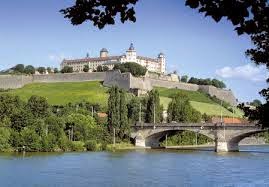 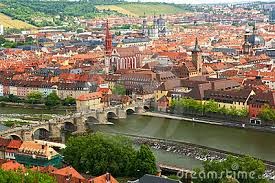 Its concept is fascinating: Christian themes interpreted by modern and contemporary artists, such as Ernst Barlach, Joseph Beuys, Otto Dix, Käthe Kollwitz, Wolfgang Mattheuer, Werner Tübke and Andy Warhol, are juxtaposed with the works of the Old Masters, including Riemenschneider, Georg Anton Urlaub, Johann Peter Wagner and Johann Zick. Slightly more modern art from the 19th century to the present day is the focus of the award-winning Kulturspeicher Museum at the old docks. Art by the world for the world is housed in this exhibition space covering 3,500 square metres. It includes the Ruppert Collection, which presents concrete art in a remarkable setting. A classical art collection awaits discovery at the Martin von Wagner Museum. The discovery of X-rays, which also took place in Würzburg, may not appear to have anything to do with art at first glance. However, Wilhelm Conrad Röntgen’s invention has been used to analyse and preserve countless works of art.

Röntgen’s original laboratory welcomes visitors, and the city looks forward to your visit too.